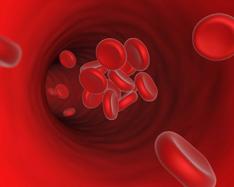 Patients with MPNs such as polycythemia vera (PV), essential thrombocythemia (ET) and myelofibrosis (MF) are at increased risk for developing abnormal blood clots. MPN patients have an increased risk for both venous thrombosis (such as deep vein thrombosis, DVT, and pulmonary embolism or abdominal vein thrombosis) and arterial thrombosis (such as stroke or heart attack). The risk for thrombosis is not the same for all patients and is likely due to more than one factor. The factors linked to the excess risk of thrombosis in MPNs have not all been precisely identified. In PV, excess red blood cells can increase blood thickness (viscosity) and this can predispose people to blood clots. Increased “stickiness” due abnormal function of platelets and abnormalities of white blood cells or the blood vessel wall itself may also contribute to the risk of abnormal blood clots in patients with MPNs.

To Reduce Risk of Blood Clots: The risk of clotting can be minimized with optimal treatment for the underlying MPN. It is known that taking aspirin can help reduce the risk of abnormal clots in many patients with MPNs. Aspirin works by making platelets less sticky. It is recommended that all patients with MPNs take low-dose aspirin to help prevent clots unless there is a medical reason to avoid aspirin. For patients with polycythemia vera, it is important to control the proportion of blood occupied by the excess red blood cells (the hematocrit). In PV, this excess risk can be minimized by maintaining the hematocrit below 45% for men and 42% for women. Efforts to normalize other blood cell counts, particularly platelets, is also often done to reduce risk of thrombosis, but the decision to do so depends upon the overall risk of thrombosis for each individual.

To Treat Blood Clots: Blood clots in arteries are medical emergencies that, when possible, are treated by trying to remove or dissolve the clot blocking the artery in order to restore blood flow as quickly as possible. Blood clots in large veins are treated with medications that interfere with normal blood clotting, commonly referred to as blood thinners or “anticoagulants." These medications help existing clots to resolve and reduce the risk of new clots. There are many “blood thinning” medications used, some are pills, while others are injected in a vein or under the skin. Because they interfere with the normal blood clotting mechanisms, these medications can also sometimes increase the risk of bleeding. Not all blood clots or patients require blood thinners. Most patients with MPNs do not require treatment with blood thinners.

Aspirin is used to help prevent certain types of blood clots. Aspirin work by blocking an important signal that makes platelets “activate” and trigger a blood clot. Aspirin is particularly useful to prevent arterial blood clots. Most patients with MPNs are advised to take daily, low-dose aspirin unless there is a medical reason to avoid aspirin. Although most patients tolerate aspirin without any problems, aspirin can increase risk of bleeding and can cause rare allergic responses and stomach ulcers. Like any medical therapy, it is important to discuss aspirin use with your physician prior to staring this treatment.
Read More

Like aspirin, clopidogrel is used to help prevent certain types of blood clots by interfering with platelet function. Although aspirin and clopidogrel work by different mechanisms, both important signals that makes platelets “activate” and trigger a blood clot. Clopidogrel is is sometimes used if clots recur in patients taking aspirin or after certain medical procedures such as coronary artery stents.
Read More

Dr. Ritchie is an Associate Professor of Medicine at Weill Cornell Medical College. She is a graduate of Barnard College and received her M.D. from Columbia University College of Physicians and Surgeons, where she was inducted into the Alpha Omega Alpha Honor Society. She completed her medical residency and fellowship in Hematology and Medical Oncology at New York Presbyterian Hospital, Columbia campus, and has been on the Cornell faculty since that time. Dr. Ritchie’s clinical and clinical research interests have been in the myeloproliferative and myelodysplatic disorders and leukemia, with special expertise in the care of older patients with hematologic malignancies. She has been the principal investigator or co-investigator of many major clinical trials related to the MPNs and the management of older patients with these blood disorders.

Dr. Joseph Scandura originally trained as an engineer earning a B.S. in Electrical Engineering from Cornell University and an M.S. in Biomedical Engineering from the University of Pennsylvania. While at Penn he enrolled in a National Institutes of Health, Medical Scientist Training Program, and earned both an M.D. and Ph.D. from Temple University. He completed his residency in Internal Medicine at NewYork-Presbyterian Hospital/Weill Cornell Medical Center and fellowship in Medical Oncology at Memorial Sloan-Kettering Cancer Center. He is Associate Professor of Medicine at Weill Cornell Medicine in the Division of Hematology and Medical Oncology.

Dr. Scandura has treated myeloid neoplasms for over 15 years and conducts basic and clinical research to discover new approaches to treat these diseases. Dr. Scandura is an expert in hematopoietic stem cell biology and the hematopoietic microenvironment. His work has been published in preeminent journals such as Nature, Nature Medicine, Cancer Cell, Journal of Experimental Medicine and Blood among others. He actively treats patients with myeloproliferative neoplasms and has been the Principle Investigator and Study Chair of Multi-Institutional clinical trials sponsored by the National Cancer Institute. His laboratory research has been groundbreaking and his group has identified central microenvironmental controls on hematopoietic stem cell proliferation and, with his collaborator Dr. Shahin Rafii, has discovered new ways to create new hematopoietic stem cells from blood vessel lining endothelial cells.

Dr. Scandura has received numerous honors during his career including Young Investigator Awards from the American Heart Association, the International Society for Thrombosis and Haemostasis and the American Society of Hematology. He was elected to the Alpha Omega Alpha medical honor society as a medical student and was inducted into the Red Key Society and Sphinx Head Athletic Honor Societies while at Cornell. He was the Charles A. Dana Fellow and a Leukemia & Lymphoma Society Fellow at Memorial Sloan Kettering Cancer Center. He was awarded the Department of Medicine Researcher Award at Weill Cornell. His research is funded by the National Cancer Institute, the National Heart, Lung, Blood Institute, the Empire State Stem Cell Board, the Starr Foundation, the Taub Foundation and he is a Leukemia & Lymphoma Society Scholar.

Dr. Schafer’s career spans over 30 years of continuous clinical and basic laboratory research and patient care in the myeloproliferative neoplasms. He is also Chairman of the MPN Research Foundation’s Scientific Board. He received his M.D. from the University of Pennsylvania, completed his residency in Internal Medicine at the University of Chicago, and his Hematology Fellowship at the Peter Bent Brigham (now Brigham and Women’s) Hospital and Harvard Medical School in Boston. He has served on the faculties of Harvard (for 13 years), Baylor College of Medicine in Houston, the University of Pennsylvania, and Weill Cornell Medical College, and he was Chairman of the Department of Medicine at the last three of those institutions. He is also formerly Physician-in-Chief at the New York-Presbyterian Hospital-Weill Cornell.

He has been the Editor or Co-Editor of 7 major textbooks of Internal Medicine (including the last 2 editions of the Cecil Textbook) and hematology, and also the author of over 220 peer-reviewed original papers. Dr. Schafer has been elected to several honorary organizations, including the American Society of Clinical Investigation (for which he served as Secretary-Treasurer), the Association of American Physicians, Mastership in the American College of Physicians, Fellowship in the American Association for the Advancement of Science, and the National Academy of Medicine (formerly Institute of Medicine). He has served as elected President of the American Society of Hematology, the Association of Professors of Medicine (from which he also received the Robert H. Williams, M.D. Distinguished Chair of Medicine Award), and President-Elect of the American Clinical and Climatological Association.

Dr. Richard Silver is Professor of Medicine at Weill Cornell Medical College. He received his M.D. from Cornell, where he also completed his postgraduate training in internal medicine and hematology. From the time of his early work as Clinical Associate, Leukemia Service, General Medicine Branch, National Cancer Institute, Dr. Silver has contributed to the development of modern clinical cancer chemotherapy.

Driven to increase collaboration and improve therapy for blood cancer patients, Dr. Silver returned to Weill Cornell and helped establish a Residency Training Program as a Visiting Fulbright Professor at the University of Bahia, Salvador, Brazil. This collaboration with the University of Bahia was also supported, in part, by the Rockefeller Foundation and still exists today. While in Brazil, he was able to journey to study the blood groups of the native people of the upper Xingu River region, where he discovered a new blood subgroup.

He is internationally recognized as one of the pioneers in clinical investigation of the MPNs, including CML. Among his many accomplishments in the field, Dr. Silver has steered the development and broad clinical application of interferons for the treatment of these diseases, and continues to be an actively practicing and publishing leader in clinical research in the MPNs. He is widely credited with developing the use of the bone marrow biopsy technique that is used throughout the world for the diagnosis of hematologic disorders. He has written over 300 peer-reviewed articles, written or edited more than four books and 20 chapters and innumerable abstracts. He is routinely listed among the Best Doctors in New York.

He has organized or has been invited to speak at numerous national and international meetings, and consensus conferences, and has had many distinguished visiting professorships. Among his many honors for his work in myeloproliferative neoplasms, he has been awarded the Catherine Pasmantier Award, the Timothy Gee Award of the Sass & Straus Leukemia Foundation, the Lifetime Achievement Award of the Cancer Research and Treatment Fund, and the Lifetime Achievement Award of the SASS Foundation for Medical Research. He has also received an Award from the Dean of Weill Cornell Medical College for “Lifetime of Academic Achievement, Dedication and Service”, the Honorary Lifetime Achievement Awards from the Israeli Society of Hematology and the University of Texas MD Anderson Cancer Center, the Weill Cornell Alumni Association and the Myeloproliferative Neoplasms (MPN) Heroes Award. He has been past President of Weill Cornell Alumni Association; Editor of the Cornell Alumni Magazine for a decade, and has served for years as a Senior Advisor to the Weill Cornell Alumni Association. He is a Life Member of the Cornell University Council. The Silver MPN Center has been named in his honor to recognize his enduring commitment and contributions to the understanding and treatment of myeloproliferative neoplasms.

Dr. Maria DeSancho is an Associate Professor of Medicine in the Division of Hematology and Medical Oncology at Weill Cornell Medicine. She received her medical degree from the Autonomous University in Spain and completed residencies at the La Paz Hospital in Spain and the Metropolitan Hospital Center in New York, with fellowships in hematology at Montefiore Medical Center and the Mount Sinai Medical Center, including advanced training in transfusion medicine and bone marrow transplantation. Prior to joining the Weill Cornell faculty in 2006, she was Assistant Clinical Professor at Columbia University and Assistant Attending Physician at the Mount Sinai Medical Center in New York.